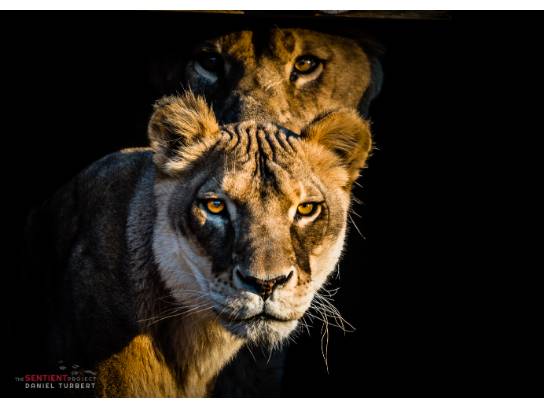 A beautiful 3' x 2' photo enlargement of Sebastian and Sheba Lions on wrapped canvas. You can definitely feel the love from this pride of lions.

Sebastian is our largest lion. He weighs 475 pounds! Though Sebastian is the largest in his pride, he lets Sheba boss him around. Sebastian is a pretty laid back lion who enjoys napping in the sun and is sometimes too lazy to even get up and eat. Sebastian loves to destroy boxes and will often lounge on them to flatten them down as far as they will go!

Sheba is one of our two female lions and is shorter in stature than Reina. Sheba does not have a tuft of brown hair on her tail, a trait lions are known for. She is our smallest lion in the sanctuary. Sheba enjoys bossing Sebastian around, always ensuring she eats first and that he defers to her. Sheba can often be found sitting atop her den box, keeping an eye on the sanctuary and ensuring she is the first one to the fence when the food truck comes around.

This photo is by Daniel Turbert.