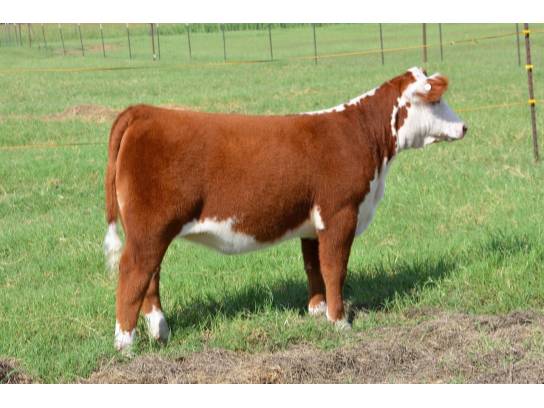 First of all, we would like to thank Paul Day, and Mark & Kirbie Sims for allowing us to be a part of such a prestigious group of heifers!

TAKE NOTE! Abby Geye finally decided to offer up a heifer for sale out of the KLD BR Carol D29. "Carol" was Champion Horned Female at the Texas State Hereford Show as a calf and went on to be a division champion at the American Royal. She continued her show career as a pair being named Champion Pair at the Fort Worth Stock Show and Champion Female at San Angelo and Houston. However, her biggest accomplishment was raising the Grand Champion Bred and Owned Female at Junior National Hereford Expo in 2015!!! We think this young June calf brings the makings to be as successful as her dam and sister. Lot 8 is good at the ground, solid built and is sure to be an easy doing female. She has a great temperament and would be good for a first-year showman. This heifer isn't over the top in any one aspect, but is as complete as you can make one. Excited to see how this one does!