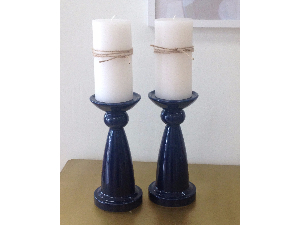 These candlesticks by Coton Colors are amoung Oprahs Favorite Things. Coton Colors is a pottery and home goods company that originated in Tallahassee. Holds paper and pillar candles. Pair with any Coton Colors topper to become a serving platter. 4wx9h. The items will be shipped directly from the Coton Colors Warehouse in Tallahassee, FL to the lucky winner.