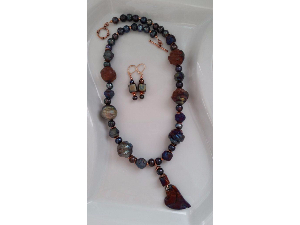 Handmade raku beads and blue pearl necklace with copper spacers. Raku is an ancient Japanese pottery style made from clay. This necklace combines the iridescence of the raku with the iridescence of pearls to create a subtle and very unique piece, made specially for the Gilmer Silent Auction by Robin Wilson.