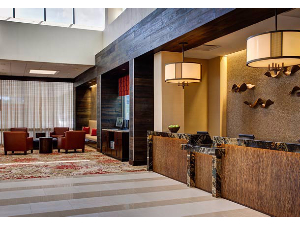 Enjoy a one night complimentary weekend stay (Friday or Saturday) in a Standard Room with Complimentary Breakfast for Two People at the Houston Marriott North.
Hotel provides complimentary Airport Shuttle to/ from Intercontinental Airport (IAH) and complimentary self Parking. ouch down in Houston, Texas and make your way to the newly refreshed Houston Marriott North. Located minutes away from the George Bush Intercontinental Airport (IAH), our hotel offers a superb location in North Houston. We've proudly earned the designation as one of the area's finest hotels with our excellent service, thoughtful amenities, and spacious guest rooms and suites. Certificate is based on availability and expires on April 17, 2016