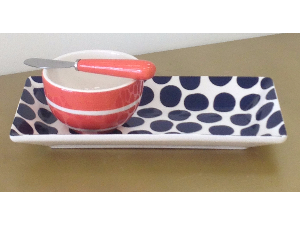 This whimsical serving tray, bowl and spreader are by Coton Colors, a company amoung Oprah's Favorite Things. Coton Colors is a pottery and home goods company that orignated in Tallahassess. Tray size: 11 x 5.5 x 1.5h. Bowl size: 4d x 2.5h with a volume of 10oz. The items will be shipped directly from the Coton Colors Warehouse in Tallahassee, FL to the lucky winner.