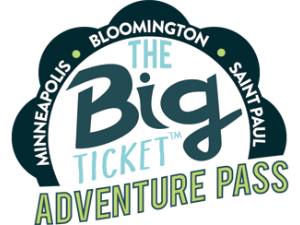 Enjoy 2 Adult Passes- The Big Ticket is a 3-day adventure pass that provides entrance to six Mall of America and Twin Cities attractions. The Big Ticket is valid at any of the six attractions listed below and is good for one year from date of purchase. Once your ticket has been scanned at the first attraction, you are allowed to visit each attraction one time within three days, so let the fun begin!