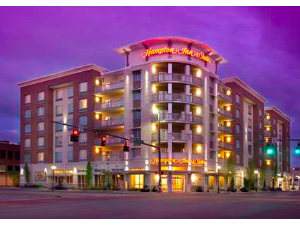 Enjoy 2 complimentary nights in one of our 2 Queen or 1 King Standard room with complimentary parking and complimentary breakfast for two. The Hampton Inn and Suites is the newest addition to the Downtown Chattanooga skyline. Our award-winning, state-of-the-art hotel is located in the heart of downtown, only steps away from the TN Aquarium, IMAX Theater, and Riverfront attractions. This beautiful, ultramodern property features a combined 134 guestrooms and suites; many with walk-out balconies.