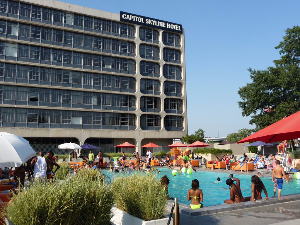 Enjoy a complimentary one overnight stay at the Capitol Skyline Hotel with buffet breakfast for 2 and parking! The Capitol Skyline Hotel is located 5 blocks from Capitol Hill in Washington DC. The client must make reservations 30 days prior to arrival, subject to availability. Room tax to be shouldered by Guest and certificate expires in April of 2016.