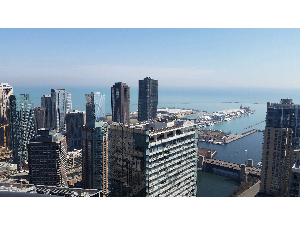 Enjoy a decadent getaway without leaving town with 2 nights in a private condo on the 56th floor of the Aqua Building . Floor-to-ceiling windows and a balcony give terrific views of Lake Michigan, Navy Pier, the Hancock Building, and thousands of twinkling lights! This is a great spot to watch the Saturday night fireworks from the pier. This 2-bedroom, 2-bathroom unit (featuring one king bed) comes with access to lounge, gym, outdoor track, and your choice of indoor OR outdoor pool. Try both - you've got the place for two nights! You're steps from Millennium Park, the Pritzker Pavilion, the Art Institute, and Magnificent Mile shopping! This unit also comes with in-unit laundry and a kitchen, but you won't need either. Cleaning is included and you'll also enjoy dinners out with a $75 gift certificate to Hugo's Frog Bar and $100 to Sable Restaurant. Dessert is included-your hosts are including a bottle of champagne and chocolate covered strawberries. Parking included.