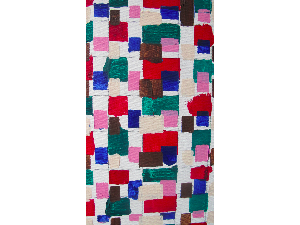 The Square, by Debbie Bradley. 48" x 24". Acrylic and pencil. 2015. 48 inches high by 24 inches wide. Acrylic and pencil. 2015. Debbie is a participant in Esperanza's WorkReady program where she learns pre-vocational skills that are important to helping her grow her independence. In the WorkReady program, Debbie sometimes works as a barista at Esperanza, visiting offices and classrooms and selling coffee and tea as a way to help her continue developing customer service skills, as well as skills like teamwork.

The Square took two months to complete, and is also the largest piece she's completed. It's a departure from the more organic style she usually works in, however her use of color helps to create the movement and energy which can be found in all of her work. Her process was thoughtful and involved laying out a grid with painter's tape. This is the most labor-intensive piece she's done.