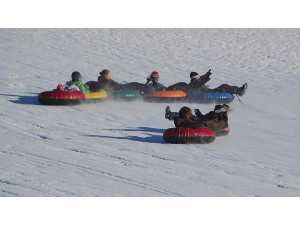 Enjoy frosty winter fun for 4 with 2 hours of snow tubing and a group lesson at Timber Ridge Ski Resort in Gobles, MI (half an hour east of South Haven). When you're back in town, continue to harness the energy of little ones with two 5-visit open jump passes for Pump It Up Chicago! , an inflatable and bouncy fun zone for kids.