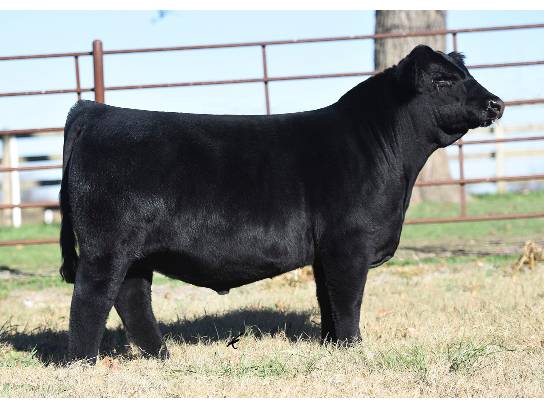 Here is the opportunity of the summer! This is the first offering of the syndicated OBCC CMFM Deplorabull D148 who is the $100,000 valued herd sire prospect that was the talk of Kansas City and Louisville in the fall of 2016. He was named bull calf champion at both the American Royal and the NAILE. When he was a calf we knew he was what this breed needed to make soft middled, sound purebreds. He is now out walking the pasture, those who have seen him recently love the chisled front one third and massive middle carriage he posesses and still flawless in motion. Deplorabull is the only bull Owen Brothers have ever blanket flushed every donor, herd bull or AI sire. With the use of some fresh semen last spring, we have three matings in the barn now breaking them for display this fall and we will let them speak for themselves. To say our anticipation is high for our fall calves to be born out of him would be an understatement.

His dam is the $36,000 value high selling Black Star daughter (Z15) and on the paternal side he has most dominant cow in the breed (8543), being sired by WC Executive Order.
He passes on several of his dad's traits but does so in a Homo Black, Homo Polled Purebred Genotype. D148 ranks in top 15% of the breed for CE and BW, top 20% for API.