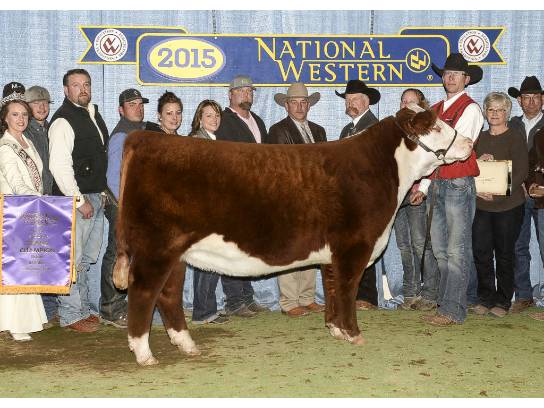 3560 was the Grand Champion Horned Hereford Female at the 2015 National Western Stock Show. A full sib to the pregnancy being offered commanded $15,000 in the 2015 McKay Cattle Co. Endless Opportunity Event.

MCKY Rico 6480 ET a full sib to the pregnancy offered was the Reserve Grand Champion Polled Bull at the 2017 Ft. Worth Stock Show.

The first 4 daughters all full sibs to the pregnancy being offered averaged $28,500 in previous sales held at McKay Cattle Co. Not only did they capture top dollar they did a lot of winning.

- Reserve Champion Horned Female at the 2017 Junior Show in Reno.

3560 is an elite Hereford donor that is ultra cool fronted, with added depth, bone, hip and is sound in structure.

What an opportunity to acquire a heifer calf pregnancy out of this proven champion!

Pregnant recip is located at McKay Cattle Co. and will be available for pick up once funds have been paid in full.