Thank you to our Auction Sponsor 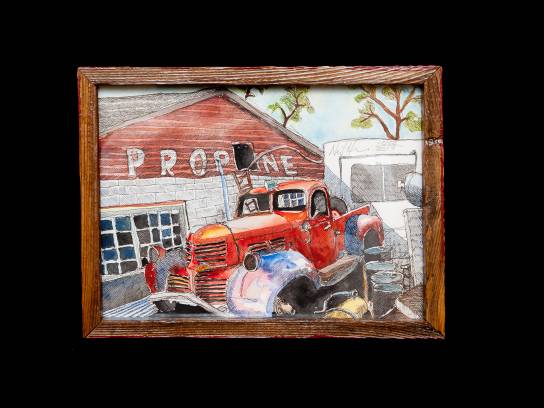 Original 13" W x 10" H watercolor and pen and ink painting of a Dodge truck waiting to be restored in a yard that sells propane.

Neil Hannum was raised in the American West and attended of Art Center College of Design in Pasadena with a focus on the communication arts and the commercial application of design. He has worked for such companies as Answer Products, a motorcycle and bicycle aftermarket supplier and for BULA, a ski head wear manufacture. Neil was part owner of Creative Conspiracy and started Durango Snack Werks the maker of Chip Peddler chips. Currently residing in Durango, Colorado since 1990.

After a recent accident on his bicycle involving a car, Neil Hannum spent 8 weeks in Denver at Craig Hospital recovering from a traumatic brain injury. After being released Neil spent time working on a rendering all of 45 presidents as part of his rehabilitation.