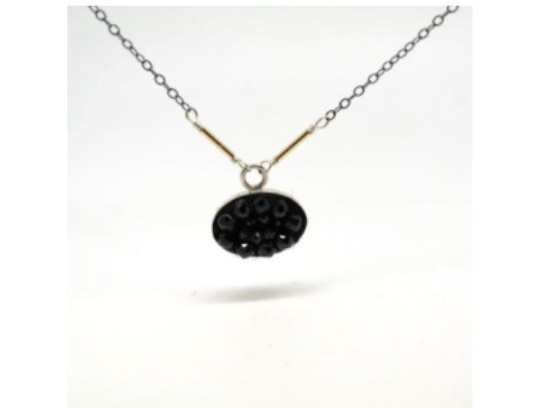 This is a sterling silver, black sapphire, mosaic necklace by jewelry designer Sophia Forero. A one of a kind piece.

Sophia Forero began making jewelry while an International Studies graduate student at the University of Chicago in the late 1980s.

After serving in the Peace Corps following grad school, Sophia traveled the world to explore jewelry through culture.

Fluent in seven languages, she has visited with local artisans in such countries as Russia, Mexico, India and her parents' native Greece, gathering inspiration and materials from which she crafts fine jewels.

Sophia launched Sophia Forero Designs in 2002 after receiving the prestigious Marshall Field's Distinction in Design Award for her work.

Mosaics form the basis of Sophia's signature style, a medium shared by all of the great cultures around the world including her Byzantine heritage. Her mission with all her work is to help all women to Feel Beautiful.

Featured in over 300 fine boutiques and specialty stores including Bloomingdale's in the US, Europe and Canada, Sophia Forero Designs have been seen on the red carpet and on TV in such films as SHOPGIRL.

Sophia's artistry continues to evolve with vibrant new lines every season, including special series dedicated to Autism Awareness and Teen Suicide Prevention. She is also currently in development on "Adorn One World," a video series that explores how different cultures use adornment to express themselves.

Sophia and her husband, installation artist Mauricio Forero, have four children and share a studio outside Chicago in Naperville, Illinois.