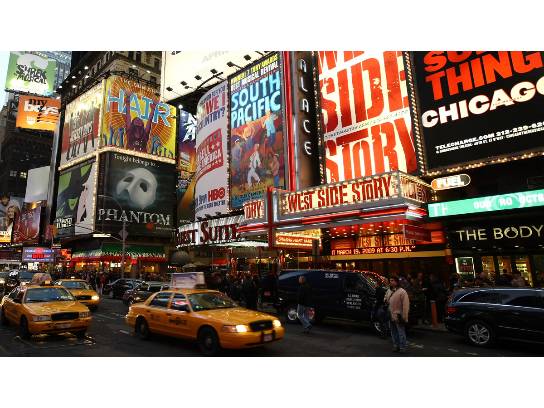 Private Meet and Greet with Cast Members for a Pre-Show Dinner, Broadway Tickets for 2

This Experience Includes:
-Private meet and greet with 2 cast members at a pre-show dinner
-2 tickets to your choice of shows: Beautiful, Chicago, Hello Dolly, Kinky Boots, On Your Feet, The Book of Mormon and Wicked
-In-theater meet and greet with a cast member following the show
-Winspire booking & concierge service

Enjoy a 3-course, prix-fixe dinner (not including alcohol) at a popular Theater District restaurant. Two cast members from the Broadway show you'll be seeing will join you for dinner. You'll be entertained with fascinating backstage anecdotes, personal career stories, lots of conversation, and photos and autographs. Following the show, enjoy a private in-theater meet and greet with a cast member!
Enjoy this up close and personal experience with two cast members from one of these Broadway shows:

Beautiful - The Carole King Musical: the inspiring true story of Carole King's remarkable rise to stardom - from being part of a hit songwriting team, to becoming one of the most successful solo acts in popular music history.

Chicago: a true New York City institution, Tony-winning Chicago has everything that makes Broadway great, now in its 20th year on Broadway!

Hello Dolly: the show debuted on Broadway in 1964 and won 10 Tonys at that year's ceremony. This 2017 revival is the first new production of this classic musical to appear on Broadway since the original.

On Your Feet: the true story, and the music, of international superstars Gloria and Emilio Estefan is in an exhilarating original production featuring some of the most iconic songs of the past quarter-century.

The Book of Mormon: from the minds of South Park's Trey Parker and Matt Stone comes the hilarious and irreverent The Book of Mormon. Winner of nine Tonys, including the 2011 Best Musical award.

Wicked: winner of three 2004 Tony Awards, Wicked is a Broadway phenomenon that looks at what happened in the Land of Oz? but from a different angle.

Note: Choose from other Broadway shows, subject to change; Hamilton available for an additional fee. Blackouts: Major holidays. Must be booked a minimum of 60 days in advance.