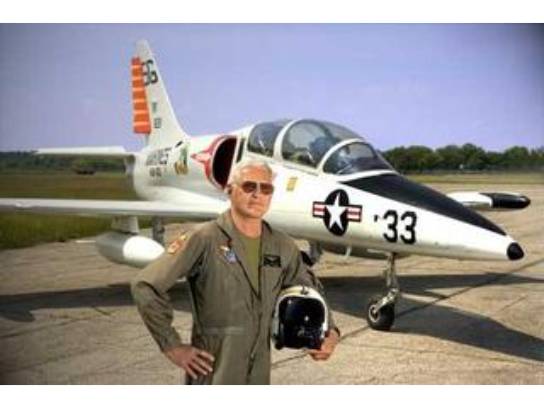 Potential bidders (18+ Yrs) may arrange a proxy for this LIVE Item by phoning Development on July 22nd at (734) 433-7782 ext 15. Have your max. bid amount and payment information ready. The Purple Rose will arrange a surrogate by Noon Sunday (July 23) to place your bid during the LIVE auction that begins approx. 7:00 p.m. Experience the thrill of a lifetime with car guy Bob Lutz (retired Chairman General Motors) in his high-performace military plane, the L-39. Fighter tactic and aerobatcis included, if desired! Hop on board a former Soviet fighter-trainer jet, Aero L-39, for unforgetable and aerial views. This amazing package includes a replica of the L-39 as a momento. The Aero L-39 Z0 "Albatros" jet, tail number N160JC, was built in 1986. It's a Czech-built war bird that served with the Libyan Air Force and was involved in combat and captured by the Chad government in Africa. A U.S. businessman purchased the aircraft and sent it to the factory in the Czech Republic for inspection and repair. It then came to the U.S. and was purchased by Robert A. Lutz, who installed state-of-the-art electronics and avionics. Mr. Lutz had the "Albatros" painted in the same color scheme of the jet he flew while in the Marines in the '60s.